The highly compressed and aged seal on this porcelain arrester has allowed moisture to enter over a long period of time.

Moisture Ingress
This graphic overview shows the effect and potential results of moisture ingress on the life of old porcelain silicon carbide arresters.

Cost of a Planned and Unplanned Outage
In 2003 the Office of Electric Transmission and Distribution under the umbrella of the U.S. Department of Energy funded a study to analyze 24 previously taken surveys on the subject of power outage costs. In the course of the study, numerous interesting conclusions were made and a model to predict the cost of an outage based on significant variables was developed. This full study is free and available here. A summary of the study can be found here.

Arresters produced in the 1950-70 era were designed and installed based on the fault currents that were available in that era. Most systems have been upgraded to higher fault current capabilities, however, old porcelain arresters still have the lower fault current withstand capability. Click here for more information.

Example of a Violent Failure Mode 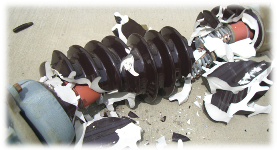 Margin of Protection
It is a well-known fact that SiC arresters did not protect equipment as well as MOV arresters. From a 2005 paper by Dennis Lenk, IEEE Fellow, the data speaks for itself. The irony is that these old porcelain arresters are generally mounted on old transformers, the very units that need the most protection due to their own degradation.

Research Paper on When to Replace Porcelain Arresters
In his landmark paper in 1996 on the service life of porcelain housed silicon carbide arresters as published in the IEEE Power Delivery Journal, Dr. Darveniza states that at 13 years of service life in Australia, 75% of the arresters showed degradation. A copy of this paper can be obtained at IEEE Xplore.